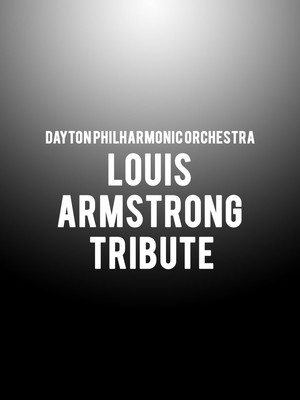 ...which we heard in all its unamplified glory as Stripling's flawless ribbons of sound embraced Bass Hall's acoustic perfection like a lover.

Louis Armstrong and his long lasting legacy as one of the most influential performers of the American Songbook era are celebrated in style during the Dayton Philharmonic Orchestra's Louis Armstrong Tribute Concert! Artistic director/ conductor extraordinaire Neal Gittleman and his ensemble also welcome pre-eminent trumpet player Gittleman for the festivities and he's no stranger to the songs of Satchmo!

Stripling's tender tribute to his very own idol has fast become one of the nation's most popular pops programs, thanks to charismatic performances that are imbued with as much virtuosic jazz artistry, virtuosity and that old-fashioned, twinkle-in-the-eye sense of showmanship of Louis himself. A past member of the Count Basie Orchestra, Stripling's pedigree and energy make him the perfect torchbearer to keep Armstrong's musical memory alive!

Sound good to you? Share this page on social media and let your friends know about Dayton Philharmonic Orchestra - Louis Armstrong Tribute at Mead Theater.