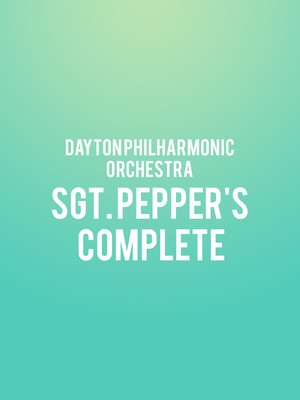 Hailed on its release as proof that popular music could be as rich an artistic pursuit as more high-minded media such as jazz and classical, the record's reputation and sense of ambition ushered in the album era

Sgt. Pepper's With An Orchestral Twist

From its iconic album cover, a veritable smorgasbord of pop culture icons, to its jangling guitars, psychedelic leanings and swirling Lennon/McCartney and even Ringo Starr vocals, Sgt. Pepper's Lonely Hearts Club Band is considered a masterpiece of the Beatles canon. Hear it recreated note for note in its entirety with a classical twist when the Dayton Philharmonic Orchestra, its Artistic Director/lead conductor Neal Gittleman and the Classical Mystery Tour rock ensemble join forces for an historic performance this Spring!

Written and completed in 1967, the seminal album signalled the end of The Beatles' touring career and the continuation of their experimentations in the studio. Praised for its innovative production, spellbinding songcraft, collision of popular music with avant-garde art and bold representation of its generation's counterculture movement, it won four Grammy Awards upon release, including Album of the Year. It lives on today as one of the most influential albums in music history.

Sound good to you? Share this page on social media and let your friends know about Dayton Philharmonic Orchestra - Sgt. Pepper's Complete at Mead Theater.