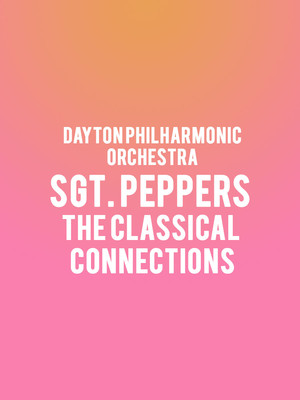 Still, today, it just sounds so fresh. It sounds full of ideas. These guys knew what they were doing. They're good. And they're inventive.

In 1996 the Fab Four came to a crossroads that would shape the future of their artistic direction, as well as the history of music itself. Tired and bored with life on the road John, Paul, George and Ringo decided to quit touring for good, opening themselves up to new concepts when it came to their primary output - recording in the studio. Released in 1967, Sgt. Pepper's Lonely Hearts Club band was the result and in it they distanced themselves from the loveable mop top image of their youth and embraced a new moniker.

Performing the innovative, world-changing album in its entirety, the Classical Mystery Tour rock ensemble joins forces with the Dayton Philharmonic Orchestra and its Artistic Director Neal Gittleman to conjure the joyful whimsy, familiar warmth and psychedelic exoticism of songs like 'Lucy In The Sky with Diamonds', 'Lovely Rita', 'When I'm Sixty Four' and 'A Day In the Life'. The special Classical Connections Edition of the hotly anticipated concert includes a casual Q&A discussion after, as well as an Ice Cream Social that includes a free scoop of hand crafted ice cream from local franchise Greater's!

Sound good to you? Share this page on social media and let your friends know about Dayton Philharmonic Orchestra - Sgt. Peppers The Classical Connections at Mead Theater.