Sorry! You missed Trombone Shorty and Orleans Avenue & Sharon Jones and The Dap Kings at The Rose Music Center at The Heights 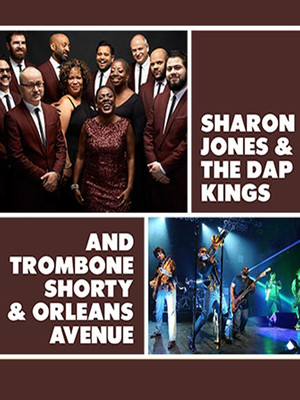 An amazing soul and jazz combo

Why See Trombone Shorty and Orleans Avenue & Sharon Jones and The Dap Kings?

Troy Andrews, aka Trombone Shorty, combines the best part of New Orlean's considerable music history with an exiting modern pop/rock/RnB edge. The trombone and trumpet player was born and raised in the Big Easy and has that brass band, front line sound running through his veins. He first took up the position as bandleader at the tender age of six and has been blurring the lines between jazz, rock, funk and hip hop ever since.

Joining Shorty and his band on these dates are Sharon Jones and The Dap Kings, whose eschewing modern digital recording techniques in favour of old school analog technology, means their soul-funk sounds like it's been beamed straight in from the 1970s. It's a heady sound which has won them a lot of famous fans and collaborations with the likes of Mark Ronson and David Bryne. Catch them all when they play The Rose Music Center at The Heights in Dayton, OH, Closed July 23, 2016

Sound good to you? Share this page on social media and let your friends know about Trombone Shorty and Orleans Avenue & Sharon Jones and The Dap Kings at The Rose Music Center at The Heights.