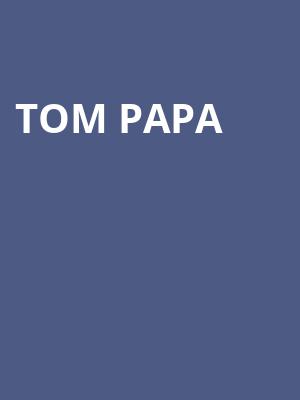 One of American's best multi-talented comics

A comedian of more than 20 years standing Tom Papa is one of those rare talents that can translate easily from the stage to television and the big screen. With projects as diverse as hosting his own Sirius Radio show Come To Papa, to hosting the Marriage Ref or even appearing opposite both Michael Douglas and Matt Damon in the HBO Liberace biopic Behind The Candlabra, Papa still finds time to partake in his first love - performing live in front of a crowd.

A good friend of Jerry Seinfeld, Papa has worked with various Seinfeld alumni in recent years, including recurring role opposite Julia Louis-Dreyfus on the CBS series, The New Adventures of Old Christine. In addition to his radio show, he has also starred in his own NBC series, Come to Papa. Based between Los Angeles and New York with his family, Papa frequently heads out on tour.

Photo by Tim Mossholder on Unsplash

You may be required to wear a mask during this performance. Please contact the venue directly for more information.

Tom Papa was fantastic last night and the Schrott Center is a wonderful... more

Sound good to you? Share this page on social media and let your friends know about Tom Papa at Victoria Theatre.